EN
简体 英文
Company NewsMedia ClippingsPhoto GalleryVideo
Alan Li, Chairman and CEO of Panda Green Energy: The core of the blockchain economy lies in the reconstruction of the business logic and the new allocation of resources
Time：2018-02-06 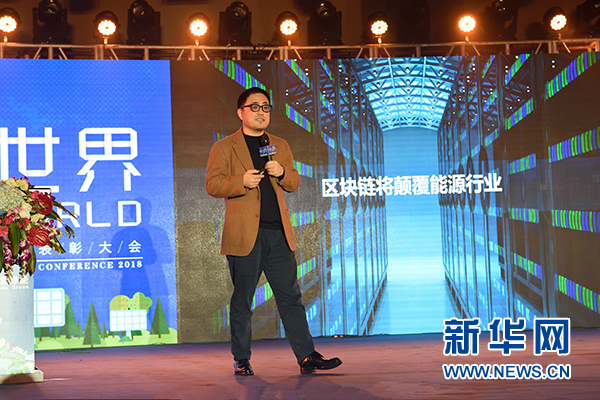 Recently, Xinhua News made a special report based on the speech about “The core of the blockchain economy lies in the reconstruction of business logic and the new allocation of resources” given by Alan Li, Chairman and CEO of Panda Green Energy.


The following is the full text of the report:

Take Panda Green Energy as an example, we cannot be immersed in a solid thinking that “We are an energy company”. We should move up one dimension and establish “provide affordable clean energy for all” as the group’s goal and mission. Not just pursue the installed capacity of 3 or 5GW, but also need we open our minds.

The application of blockchain should not be underestimated, in my point of view, the world in the future can be divided into five parts:

The second part is artificial intelligence;

The third part is 3D printing;

The fourth part is intelligent manufacturing;


The fifth part is the Internet of Things.

The blockchain makes it possible for people to depend on artificial intelligence to filter out vast amounts of data and summarize the information they need. For instance, due to the asymmetric information, people who hold a real estate license would have to ask for services from agencies when buy or sale houses, whereby the real estate company may earn the price differences. For another example, the surplus things at home are useless and wasted, which can be solved by artificial intelligence in a second in the world of blockchain. The blockchain can decentralize these small centers such as real estate companies and exchanges.

If using a mobile APP, a foreigner can make a choice between traditional energy and clean energy; also, the blockchain’s smart contract will be created to link hydropower resources in Tibet to meet his needs within 64 milliseconds. Blockchain services can also be customized, and the foreigner can request electricity generated from the power station in Hami Xinjiang, or at the foot of the Alps. This is the scenario application of the blockchain. And the blockchain technology, which brings the world’s revolution, is what Panda Green Energy is doing right now.

In March of this year, Panda Green Energy will implement the related application. As the saying of Neil Armstrong goes, "that's one small step for man, one giant leap for mankind". In the future, new energy sources all over the world should be transmitted by this way, and respond to the climate change by universal action.

Zuckerberg said in his 2018 mission statement, “There are important counter-trends to this — encryption and cryptocurrency — that take power from centralized systems and put it back into people's hands”, “I am interested to go deeper and study the positive and negative aspects of these technologies, and how best to use them in our services”. Facebook is the representative of centralization.

In the future, everyone make own decision for their personal assets, credit and life in the world of blockchain. But a foundation is necessary, which is the real implementation of the Internet as the constant iterations of 5G/6G and super chips technology.

Blockchain 2.0 develops from virtual currency to asset digitization transactions. Nowadays, blockchain is facing the real problem: how to process the digital transaction of assets? This is not only a pain point, but also a motivation. In the future, a large amount of agencies will be engaged in the connections between the real world and the digital world.

Therefore, the core of blockchain economy is not technology, but the reconstruction of business logic and the new allocation of resource. We are about to welcome an age of resource redistribution, and own opportunities in our hands. Blockchain will be able to record and trace everyone’s debt, equity, copyright and other information about credits.

At present, Kodak is taking the lead in the area of blockchain by releasing the Kodak coins. Each photo taken by Kodak camera will record the photo’s information, including location, time, even locating the photographer on the world map. This is the good application of the blockchain.

Does the application of energy and energy Internet have to be connected with a wire? The answer is no. The clean energy all around the world can be connected through the Internet.

Blockchain 3.0 is blockchain + Internet + artificial intelligence, which is equal to the world’s new and subversive architecture. It surpasses fields of economy and infiltrates the distribution of assets and resources. Also, it stimulates large scale collaborative operations in various fields of science, medicine, education and health. Only blockchain technology can integrate different kinds of resources across all over the world, because it can establish the trust. Blockchain is based on the unique code, which make everyone to believe the world of Internet of Things. It greatly reduces the waste of social resources, improves its efficiency and makes the information open and transparent. This is the real reconstruction of the world.

How does the blockchain subvert the energy industry? Clean energy is wonderful, but despite its declining prices, it is more expensive than the traditional energy. Ordinary people want to use the clean energy still need to rely on the power supply station, power supply bureau or power grid of their own living district. Energy Internet technology and blockchain technology can subvert it by decentralization, removing the trust, and achieving the smart contracts. Specifically, making the ‘Net’port by power supply bureau, and allowing users to conduct their own P2P contact.

As Internet realized the transfer of information, blockchain plus Internet solved the transfer of credit. In the future, the supply and demand sides can automatically generate contract credit in the blockchain. For example, 1kWh electricity can automatically generate a bock chain, which based on the trigger condition of the smart contract designed by blockchain + big data + artificial intelligence, within 64 milliseconds, generates dynamic instruction according to dynamic environment.

The every evolution of civilization is quiet, but unstoppable. As the Internet world appear quietly around us. Mobile payments have plunged demand for supply of money. The limitations of technology should not limit our imagination of the future.

In the business of energy Internet, we must keep a larger viewpoint, and using our own resources efficiently. The energy blockchain will bring everyone benefits of new energy, and accelerating to achieve No. 7 UN Sustainable Goals, which is ensuring everyone have access to affordable, reliable and sustainable clean energy.