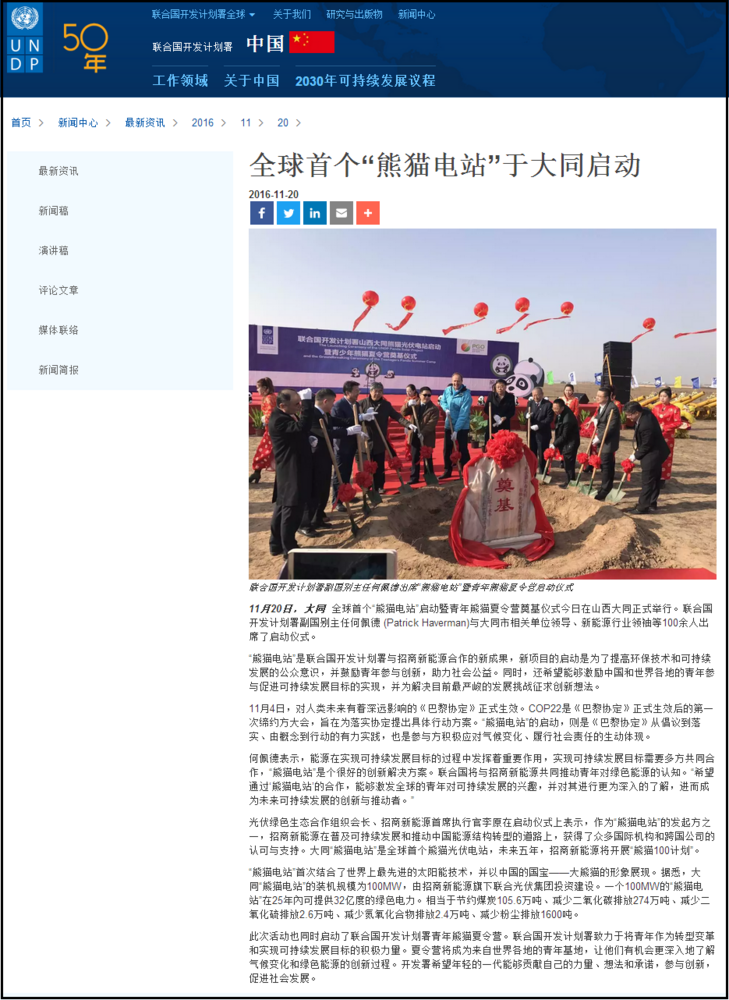 Datong, 20 November - The Construction Commencement Ceremony of the first Panda Solar Station, and opening ceremony of the Panda Summer Innovation Camp was launched in Datong today.

The Panda Solar Station is being built as part of a recent partnership between United Nations Development Programme in China and China Merchant New Energy (CMNE), with the launch of a new initiative designed to promote public consciousness about environmental-friendly technologies and sustainable development, as well as to encourage youth participation in innovation for social good. The campaign hopes to engage and inspire the youth in China and elsewhere in the world to promote the Sustainable Development Goals (SDGs) and provide a platform to solicit ideas on helping to tackle some of the toughest development challenges.

Representing a unique opportunity to take action against climate change, as well as contributing to the achievement of the SDGs, the Panda Solar Stations is the first integration of the world’s two most cutting-edge solar energy technologies, and base their appearance on China's national treasure - the Giant Panda. The 50 MW power plants cover a total area of 248 acres, with the black part composed of monocrystalline silicone and the grey and white part thin film solar cells.

“To achieve these universal, bolder, and more transformative Goals, we need leadership, commitment, talent, and innovation to drive their implementation,” said Patrick Haverman, Deputy Country Director of UNDP China, remarking on the importance of the private sector partners, such as CMNE, taking the lead on Green energy and climate change in China.

Furthermore, the event also launched the UNDP Summer Innovation Camps for Youth. UNDP is dedicated to engaging the youth as a positive force for transformational change and achieving the SDGs. These summer camps will be a base for youth from all over the world to have the opportunity to gain a deeper understanding of the process of innovation for climate change and green energy. UNDP hopes to harness the energy, ideas and commitment of the next generation to engage with innovation for development.